Aroview: In his gravest comedy yet, the fearless Michael Moore dissects the credibility of the Bush administration since the election controversy of 2000 and its response to the events of September 11.

With his patented mix of conviction, wit and intelligence and the instincts of a gifted storyteller, Moore mounts a passionate and thorough thesis that shamelessly condemns Bush and his cohorts for their misleading and manipulative agenda over the war in Iraq. Ultimately, though, the film is most powerful, and requires to be seen, as a sobering and devastating indictment of war. 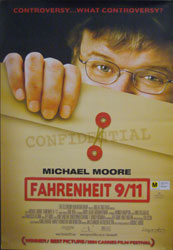