Bound by a sense of recklessness, team spirit and a keen sense of their own absurdity, the core team attempt to tightrope walk over alligators, give themselves paper cuts, snort wasabi up their noses, ride headlong into cacti, performing innumerable lesser pranks along the way. Crude and irresponsible, yet often hilarious, ironic and downright silly, this represents an inspired nadir in contemporary television. 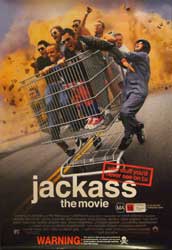