“While no entry in the franchise has surpassed the original film, this Halloween sequel is truly a cut above the rest and a great piece of horror entertainment even for those unfamiliar with the series.”~IGN, Jim Vejvoda

Aroview: Jamie Lee Curtis makes a triumphant return to the Halloween franchise as Laurie Strode, now a badass grandma who has been waiting her whole life to kill Michael Myers. A fantastic horror on it's own terms, which wisely sidesteps the many other sequels by simply following on from the original film, set nearly 40 years later. 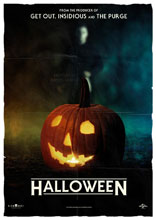