The wide canvas of characters ranges from leader Julius Caesar and his adversaries to a pair of chalk and cheese soldiers. A lot more interested in politics and bedroom antics than battle scenes, though be prepared for occasional on-screen reminders that surgery did indeed begin before anesthetics. Also, allow an episode for this ambitious series to find its footing. 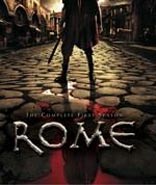