Mr Death: The Rise and Fall of Fred A. Leuchter, Jr

Aroview: Another wholly idiosyncratic and remarkable work from documentarian Errol Morris, this time with the human oddity factor turned up to a near-squeamish intensity.

The film introduces Fred A. Leuchter, an individual who is quirky, amoral and enterprising enough to have built a successful niche business out of designing and building equipment for state executions. His story takes on increasingly bizarre twists and turns as his peculiarly morbid 'expertise' singles him out as a defence witness for a man indicted for unlawfully propagating the WW2 Holocaust as a 'myth'. It soon becomes apparent that we are witnessing a character whose exaggerated levels of confidence and naivety have landed him clearly out of his depth, and perilously (and compulsively) close to drowning… 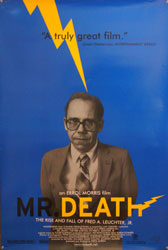