Aroview: Released from prison after doing someone else's time, an embittered yet benign loner sets about evening the score, but not before kidnapping a sweet teenage girl and parading her as his wife before his estranged parents.

Written, directed, scored and, of course, starring, self-proclaimed 'genius' Vincent Gallo, his melancholy ballad, though flawed by the indulgent tendencies of a determinedly do-it-yourself artiste, is more ambitious and distinctive than most, visually striking (shot on reversal stock), and ultimately redeemed by a finale that can only be described as a stylistic coup. In the end, an almost-masterpiece that will probably endure. 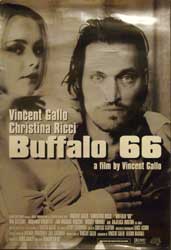