“A brisk, exciting and likeable film. The made-up elements are sweetly inconsequential, but the creation of the tower is still impressive today.”~Graeme Tuckett, Stuff

Aroview: Handsomely mounted biopic set in the 1880's, telling the story of Parisian civil engineer Gustave Eiffel (Romain Duris) and his design of the Eiffel Tower for the 1889 Paris World Fair.

While world-renowned engineer Eiffel would prefer to design the subway, the French government calls on him to create something decidedly more spectacular, and his views change when he falls in love with a well-to-do proto-feminist. At this point the script takes a few liberties with historical fact, all in the service of a stirring romantic subplot that is almost mandatory given the subject and setting. 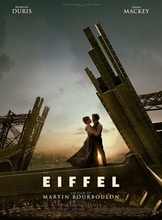