“This is truly a documentary for our times, deserving of widespread exposure.”~Jay Weissberg, Variety

Aroview: A blistering Romanian documentary following a heroic team of journalists from the newspaper Gazeta Sporturilor who attempt to uncover the country's health care fraud following the Colectiv nightclub fire of 2016.

The tragic fire in Bucharest killed 64 people, 38 of which died in hospital in substandard conditions. The mass public protests that resulted forced the ruling Social Democratic Party to resign amidst an emerging scandal which involved bribery and corruption in the public healthcare system. It eventually emerged that hospital disinfectant made by Hexi Pharma had been diluted, causing ongoing fatal infections in hospital patients, and that the intelligence service had known about this for years, as moguls and politicians continued to benefit from the fraud.

Provides a gripping and incisive investigation of institutional corruption in Romania, deservedly becoming the first film from this country to be nominated for an Academy Award. 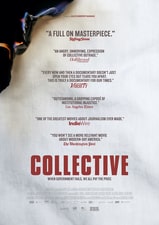