It's success would rapidly inspire a US television series, while creator Russell T. Davies would go on to successfully revamp the Doctor Who franchise six years later. 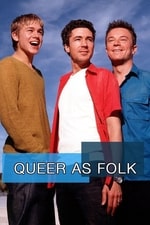