“An utterly inspired docu-fictional hybrid, like her previous feature The Rider. It is a gentle, compassionate, questioning film about the American soul.”~Peter Bradshaw, The Guardian

Aroview: Frances McDormand offers arguably her greatest performance yet (ahead of a cast of nomadic non-actors) as a woman who leaves her recession-hit Nevada hometown after her husband dies to embark on a journey through the American West, living as a van-dwelling modern-day nomad.

Written, edited, produced, and directed by Chloé Zhao (THE RIDER) and based on the non-fiction book Nomadland: Surviving America in the Twenty-First Century by Jessica Bruder. 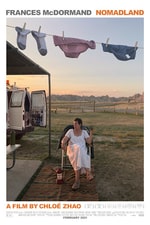