Actuality Dramas of Allan King, The

Aroview: A collection of five cinema-verité style documentaries from the extraordinary Canadian auteur Allan King, all of which are emotionally riveting portraits of the everyday, always without the use of interviews or narration.

A Married Couple (1969, 97 min) - An unforgettable portrait of a marriage in crisis, unflinchingly tracing the couple's attempts to resolve their issues in the wake of broken down gender roles.

Come On Children (1972, 92 min) - Ten teenagers journey towards self-discovery on a farming retreat away from parents and teachers, in this portrait of disillusioned youth in the early 1970's.

Memory for Max, Claire, Ida and Company (2005, 112 min) - King spends four months following the daily routines of the people who live and work in a Toronto Dementia care unit. 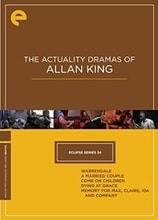