Love We Make, The

Aroview: Shot on 16mm B/W film by documentary legend Albert Maysles, this is a suberb, all-access document of Paul McCartney's efforts to organize a benefit concert for the families of NYC fire-fighters who lost their lives in the World Trade Center on September 11, 2001.

Not just another post-mortem on the 9/11 tragedy, the focus here is on the famous Beatle himself, and it's his candidness which makes this essential as a late-career document for fanatics. Featuring cameo appearances by David Bowie, Steve Buscemi, Eric Clapton, Bill Clinton, Sheryl Crow, Leonardo DeCaprio, Harrison Ford, Mick Jagger, Jay Z, Billy Joel, and Elton John, who all rally around in support of their living idol, this proves genuinely revealing of the stratas of mega-celebrity. 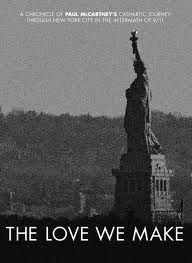