Aroview: Must-have DVD & CD collection of Billy T. James Greatest Hits. DVD includes over an hour of newly released material from the TVNZ vaults including skits from BILLY T JAMES SHOW, the Royal Variety Show and commentary on Billy's acting gig in CAME A HOT FRIDAY with the CD including highlights from one of Billy's great gigs at 'Pip's Nightclub' in the 80's. 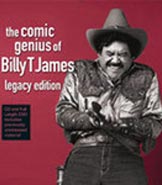