Aroview: Vivid filmed account of a legendary travelling rock festival, which crossed Canada by train in June 1970 and reached realisation in a series of loose-haired concerts, jam sessions, booze-ups, the odd riot and eventual financial ruin.

What emerges in this recently rediscovered footage is one of the great wild events of the period, with relaxed, sizzling performances from The Band, Janis Joplin, The Grateful Dead, Buddy Guy, Delaney and Bonny, Gram Parsons and others, (Joplin in particular is preserved giving one of her greatest live moments, singing 'Cry Baby'.) The backstage footage also reveals many an unguarded moment from these celebrities, the entire portrait truly evoking an era of spirited chaos. 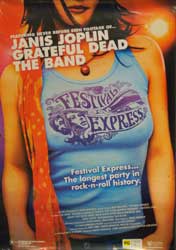